You are here: Home / Programming / Algorithms / Karatsuba Multiplication in Python

The Karatsuba multiplication algorithm is named after the Russian mathematician Anatoly Karatsuba. It uses a divide and conquer approach that gives it a running time improvement over the standard “grade-school” method. Read on for Python implementations of both algorithms and a comparison of their running time.

You are given two integers x and y. Both have a length of length n digits. You want to find the product of these two numbers. So you want to find z in: z = x * y

The size of the problem is n. The more digits in x and y the harder the problem.

Above I have assumed that both x and y have the same digit length. The problem can be extended to cases where they are not the same number of digits. To do this just add the appropriate number of zeros to the left of the smaller of the two integers.

This is probably the method for multiplying numbers that you learned in school.

First you tackle the units of the second number (2): 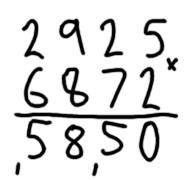 Don’t forget to carry the 1s! 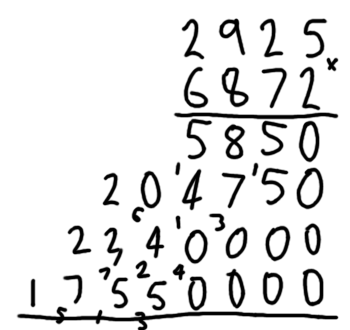 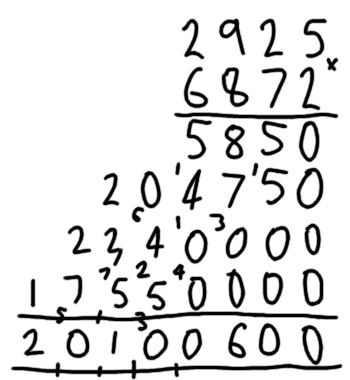 When thinking about running times we need to be clear what we actually mean by running time. All the calculations in the algorithm can broken down into single digit additions, subtractions and multiplications. This is what we will base our running time analysis on.

How about adding all the partial multiplications? How many basic operations will that use? At most 2n2 are needed.

In total the maximum number of basic operations the grade-school algorithm needs to use is 4n2. This is the worst case running time. If we get lucky and multiply two numbers that don’t need lots of “carrying” then fewer calculations will be needed.

The key to understanding Karatsuba’s multiplication algorithm is remembering that you can express x (an n-digit integer) in the following way:

You can use this if you want to multiply x by another n-digit integer y:

Then x multiplied by y can be written as:

This is where Karatsuba found a neat trick. He found a way to calculate ac, bd and (ad + bc) with just three multiplications (instead of four).

To see why think about:

If you have already calculated ac, and bd then (ab + bc) can be calculated by subtracting ac and bd from (a+b)(c+d):

You can use Karatsuba’s trick recursively to compute the multiplication.

By “recursively compute” I mean call the algorithm again to calculate these multiplications. For recursion you always need a base case to prevent an endless loop. The base case here is when the two integers x and y are single digit. In this case the algorithm just calculates and and returns their product.

Beware: this is only valid for integers with an even number of digits. You can easily extend it to be correct for odd digit integers. You just need to make sure there is consistency between the number of digits in b and d and the zeros you add to get A and B.

Let’s apply the Karatsuba algorithm to a simple example. We want to multiply 2925 x 6872 (again!) 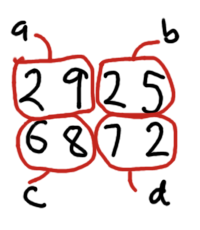 Here’s my implementation of Karatatubs’s algorithm. The zeroPadd() function defined above in the code for the grade-school algorithm is used. k is the variable I use to hold the value of (a + b)(c + d). Also notice the use of recursion when calculating ac, bd and k. This works because a base case is specified for single digit integers. 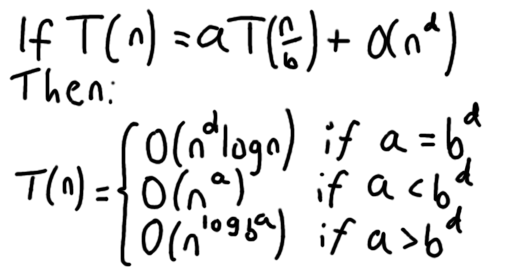 Each time a recursive call is made it is on a problem of half the size. This is because of the way each number is broken into two even sized chunks. So b = 2.

Outside of the recursive calls Karatsuba’s algorithm uses a constant number of addition and subtractions. Six in total. On lines 27, 29 and 30. Each of which will use at most 3n single digit additions. So we can say the work done outside recursive calls is O(n). So d = 1.

Because a = 3 and db = 2 we know a < bd. This means the last case of the master theorem is used. So the running time of Karatsuba’s recursive algorithm is: